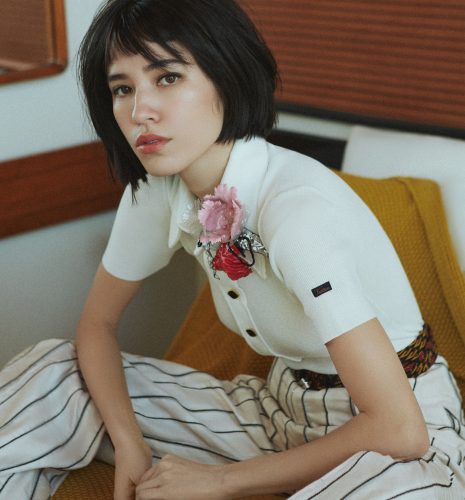 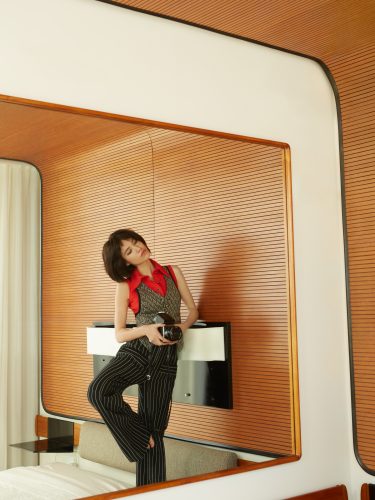 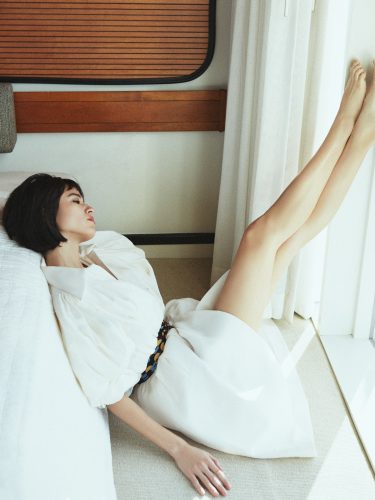 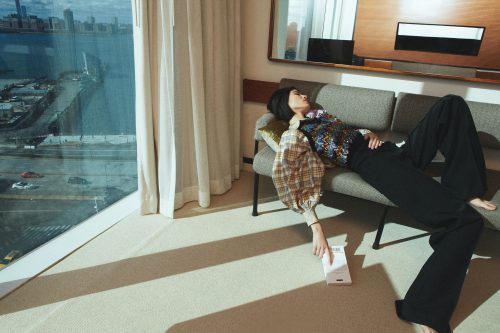 Kelsey Asbille isn’t waiting for anyone to open the door for her. The twenty-eight-year-old Yellowstone star knows that it’s important to take chances to achieve your dreams. The South Carolina native has been working steadily in the film and television business since her adolescent years. Falling in love with acting at age 11, Asbille enrolled in drama classes and took part in theatre productions to feed her passion. Her natural ability and drive to succeed landed her roles in Hollywood productions.

Younger audiences will recognize Kelsey Asbille from her turns on family-friendly sitcoms, popping up on Disney’s The Suite Life of Zack and Cody, and as shy student Gigi Silveri on the CW teen drama One Tree Hill. Though in recent years, Asbille has hung up her Disney mantle for more mature projects.

For the past three seasons, Asbille has starred alongside Hollywood powerhouses Kevin Costner, Wes Bentley, and Kelly Reilly in Paramount Network’s Yellowstone, a Western drama that follows the Duttons, a dynasty of ranchers caught in a Shakespearian power struggle with the neighboring Native American reservation. Asbille plays Monica, a Native American woman whose relationship with Kayce Dutton (Luke Grimes), is often tested by external forces. The couple’s chemistry has proven a hit with audiences who tune in week after week to see if the star-crossed couple will be able to overcome the latest trial on their road to domestic bliss.

Following filming of Yellowstone’s third season, Asbille accepted a role in the fourth season of FX’s anthology series Fargo . In that universe, she plays against her good-girl image, taking on the role of an outlaw cowgirl. Asbille teases that her character is “a simple fella.” Though this simple fella is one that Kelsey Asbille has had to temporarily put aside due to the coronavirus pandemic. Like most of the entertainment industry, production on Fargo has halted, and Asbille has traded the set for her Brooklyn apartment.

But one gets the sense that even in quarantine, Kelsey Asbille is still looking for doors to open. She’s enrolled in online courses at Columbia University, planning to complete her studies as a Human Rights major. This degree may seem unexpected for someone who has been a working actress since her teen years. But Asbille, who comes from a family of doctors and medical aid workers, sees the degree as an opportunity to give something back to the world.

Catching up with Kelsey Asbille over the phone, Tings Magazine spoke with the actress about her start in the business, her academic goals, her love-hate relationship with social media, and why she believes Kevin Costner is one cool costar.

How are you doing?

Okay. It’s been pretty crazy here. My cousin is an ER doctor at a New York hospital. She’s really on the front lines. I think about her all the time.

What are you doing to reduce your anxiety?

I’m still figuring that out. Honestly, I feel it’s so easy to get into the list of movies and books and recipes that I have to conquer. So, I’m trying to slow my mind, my anxiety down, I talk to my family and friends. I think that’s the most helpful.

What are you currently listening to or watching?

The new Jessie Reyez album which I really love. I’m always listening to Ibeyi. I just find those girls really inspiring and uplifting, especially at a time like this. I’ve watched ‘Watchmen’, which was amazing, ‘Blindspotting’, and ‘Don’t Think Twice’, which may be one of my favorite films I’ve seen since I’ve been quarantined.

What drew you to acting?

My first real experience, I was eleven; I did my first community theatre play. I was taking a dialect introduction class. It was at the local community theatre. They were auditioning people for the play, and I was like, why not, let’s see what happens. It’s all about the community there. It’s people who act on the side, that have other jobs, but make the time because they really, really love it. I was like, this is something that I really love to do. So, I just followed that passion.

Early in your career, you worked on several shows geared towards kids and teens (One Tree Hill, The Suite Life of Zack & Cody, Den Brothers, Pair of Kings). How did those experiences influence you as an actor?

My glory days. One Tree Hill was my first time on a set. It introduced me to that world. It helped me navigate a set. And the Disney shows especially, the American sitcom is such a special medium. We’d block one day and shoot in front of a live audience the next day. So, they’d bring in kids every Friday night, and we’d rework jokes. It was such an amazing experience. It helped me; it was all building blocks.

It seems like that would have to teach you to be quick on your feet.

Definitely, you’re always on. It’s a mixture of TV and theatre .

What sacrifices did you have to make for your career?

Honestly, time with my family and my friends. I don’t get to see them nearly as often as I would like to, and that’s what I value the most as I get older, and especially make time for. Because that’s what makes all of it worth it. Especially with my parents, I like bringing them on set. I just had my parents with me on Fargo, being able to take them around Chicago, pay for a nice meal, and put them up in a nice hotel. My Dad was really fun. He’s really not been on set before. I let him read the script. And he was like I thought you were supposed to do this and that. I’m like Dad, that’s the final version. This is going to take a long time.

It seems like you’ve had some great role models. Going off of that, what’s the best advice that you’ve been given or would give to others?

My mom was always a ‘yes’ person. She was the first person who made me realize you can open doors for yourself. I carry that mentality with me in my career. Nothing is impossible; you just have to keep carrying on. I always got her voice in the back of my head saying, “Why can’t you make this work?”

It seems like your family is really important to you.

They really are. I think that’s the toughest part of this, being separated from them. Thank God for Facetime because they mean everything to me.

You were a Human Rights major at Columbia University? Why did you want to study that?

I’m still doing that. I re-enrolled to take the summer semesters. It’s online because of everything that’s happening. So, I’m back in school, finishing my Human Rights major.

Why did you want to study that subject?

My first interest was public health. It’s because of my family. My grandmother worked with the World Health Organization. My dad is also a doctor. It’s the way I carry the family business. This was a way to pay tribute to them, to be of service. Also, Columbia doesn’t have a public health major, so I thought Human Rights would be the best way to incorporate that.

How do your studies impact your daily life or your career?

Absolutely, the best thing I can do acting-wise is really not study acting. That part of my life is so dominating. That’s why I like living in New York; you just get to be in the classroom with people of all walks of life. I think it’s really helpful.

In recent years, there has been a larger discussion about creating a more inclusive industry.Do you think there needs to be a greater variety of roles for women in film and television?

Yes, of course. I think that it’s important for that to be the norm. Telling the stories of women should just be a normal thing.

Going off of that idea, what would be your dream role?

The role that I just played in Fargo was a dream role. It’s unlike anything I’ve ever done. She’s quite a fella. She’s an outlaw cowboy. I just had the time of my life doing that. But more than dream roles, I have dream directors. I think also, for instance, it’s fun to work with different filmmakers, and have collaborations with different directors, like Taylor Sheridan with Yellowstone . It’s nice to have that working relationship as well.

How do you deal with the positive and negative aspects of social media?

I don’t think I deal with it well. I really shy away from it. Although I think there are positives, and it’s a connection that is needed, especially right now, I’m definitely not the best person to ask about it. I’m still figuring it out.

What do you want viewers to know about Yellowstone ?

I honestly want the audience to escape and love the show. Our third season airs in June, so we’ll probably still be in this quarantine. I know the movies and TV shows that I watch have been a great help to me, and I hope Yellowstone does the same for people.

Your character’s relationship with Kayce, though tested, has been described as the emotional center of the show. Why is that relationship so important to viewers?

I think Monica is such a moral compass of the show. That’s a hard position for her to be in. I think their relationship, when you have everything against you, and you can see them triumph over it, it’s always a beautiful story that people want to see. She’s an interesting character as well because you see the fragility to her strength. You see behind the closed doors that she’s really struggling. But she keeps her chin up and keeps going.

You have a lot of affection for your character.

I think you have to. Gena Rowlands said something that was kind of funny. You have to be the best defense attorney for your characters. You have to defend them at any cost. And I think that’s true.

He’s a dream. I’ve grown up watching his face, and that novelty hasn’t worn off. He’s really so kind and a true leader. He’s everything you expect him to be, honestly. And he’s in a band. He’s cool.

Speaking about expectations, what was it like joining Fargo ?

Absolutely. I still can’t believe I’m a part of it. I’m a huge fan of the show, a huge fan of the movie. This season, in particular, is about the deconstruction of the American dream. Just going from Yellowstone’s Monica, who is a moral compass to my character who rejects the game and rules of society, has been such fun. I’ve had the best time, and I’ve learned so much. With Yellowstone and Fargo , I’ve been very lucky with the ensembles. They are both masterclasses and I’m taking notes.

What more can you tell us about your Fargo character?

Yeah, she’s an outlaw. She’s a simple fella. But she’s really committed. I’m a big fan of her. I’m being branded now. I’m in this Western world. I’m either surrounded by cowboys or cowgirls.

Filming took place in Chicago. What’s filming like in that city?

It’s an amazing city. I’m such a huge fan of Chicago. I really, really loved it. It’s definitely a top five city for me. I loved it.

Finally, why should we tune into Yellowstone or Fargo?

With Yellowstone , I think you just got to watch till the end. We are getting to a point where the antagonist is bigger than just one person or group of people. The end of the season is wild. With Fargo , that speaks for itself. Tune in.